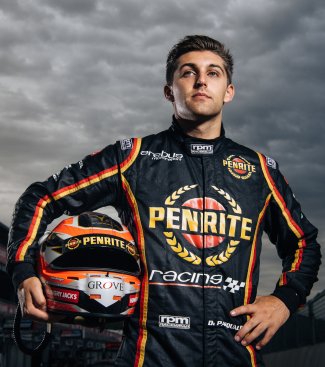 Anton De Pasquale certainly impressed as a rookie in the Supercars Championship in 2018. Joining Erebus following two seasons in the Super2Series and a spell in Europe, he produced a string of impressive performances including qualifying third at Bathurst, in his first start there and together with David Reynolds helped the team finish a best ever fourth in the Teams Championship.

Anton’s impressive amateur career is what caught the eye of the team, beginning with him winning the Australian Formula Ford Championship in 2013. He then set his sights on European open-wheelers, heading overseas and entering the highly competitive Formula Renault 1.6 NEC Championship in ’14.

He won nine of the series’ 15 races on his way to claiming the title that same year. He took the next step and entered the Formula Renault 2.0 series and became a member of the FIA’s Young Driver Academy before returning home to Australia.

The then 22-year old joined the Super2 grid in 2016 and finished 11th as a rookie and third in the non-points Bathurst race before rising to fourth last year.

Picking up two wins, six podiums and one pole position along the way, Anton impressed Erebus Motorsport during a rookie test and raced the #99 Commodore in his debut season with Supercars.

2019 has seen Anton step up big time. Combining his first-year experience with raw speed and skill he secured two podiums at Phillip Island and Tailem Bend. His against the odds podium at PI earning him big respect, with team CEO Barry Ryan hailing it as the ‘’highlight’’ of the team’s season.