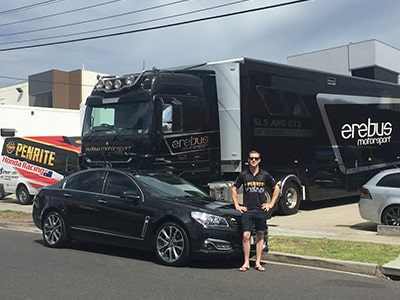 Mount Isa’s Malouf Auto Group will partner with Erebus Motorsport for the 2016 V8 Supercars season, and they are bringing the Mount Isa community along for the ride.

Servicing Mount Isa and the surrounding region for over 40 years, the family-owned business will support both Erebus Motorsport V8 Supercars entries for the year.

Having actively supported sporting clubs in their region, Malouf Auto Group Principal, Paul Malouf, is keen to share his passion for V8 Supercars with the Mount Isa community.

“I’ve known Dave [Reynolds] since 2009 when he first came to Mount Isa as a guest at one of our car shows and we’ve kept in contact over the years,” said Malouf.

“When I heard that Erebus Motorsport was switching manufacturers to Holden, I contacted Dave and the partnership for 2016 evolved from there.

“We’ve never been involved with V8 Supercars before, and we’re very conscious of supporting the local community in Mount Isa and the surrounding areas.

“But this is for the community – it’s not just Malouf Auto Group who are sponsoring Erebus Motorsport, but the whole of Mount Isa – I’m certain that the whole town will get behind Dave and the team.

“Due to our remoteness, we often miss out on big events and celebrity visits, but this relationship will bring V8 Supercars to Mount Isa and that’s going to be awesome!

“I’m super happy to be involved with Erebus Motorsport – I’ve been a V8 Supercars fan since I was a kid, and Dave is a great guy, so we’re all super pumped to be a part of the team for the year.”

The Clipsal 500 begins on Thursday March 3 at the Adelaide Street Circuit.