The season will commence at the spectacular Newcastle Street Circuit on the first weekend in March.

The Great Race, the 161-lap 1000km Repco Bathurst 1000 will return to its traditional date in the NSW School Holidays of 6-9 October.

Newcastle and the Gold Coast’s street circuit events will be brought back to life, with Gold Coast’s date returning to the post-Bathurst weekend in late October.

Sydney Motorsport Park which hosted four consecutive weekends of memorable racing this year, will host the scheduled season finale, under lights on 18-20 November. The venue last hosted the Supercars decider in 2003 and 2004.

Racing is slated to return to Perth and New Zealand after COVID-19 restrictions forced changes to the 2020 and 2021 calendars. The ITM Auckland SuperSprint will return in September to Pukekohe Park Raceway. Perth is set to host the opening night race of 2022 from April 30 – May 1.

After their stunning unveiling in Bathurst this week, the Gen3 Chevrolet Camaro ZL1 and Ford Mustang GT Supercars will turn exhibition and testing laps at various events throughout the year, to give fans a glimpse of what is to come when they begin racing in 2023.

Supercars CEO Sean Seamer said next year’s calendar was a win for fans and viewers watching on Foxtel and Seven following the challenges COVID-19 presented in the past two years.

“The 2022 season will follow an unprecedented two years for Supercars in which the COVID-19 pandemic resulted in two revised calendars – a huge achievement given the nature of the sport,” Seamer said.

“It has been fantastic to welcome fans back to events this year, and we will continue to ensure this is done safely and in line with national guidelines as we welcome more fans back in 2022.

“We are very pleased with the interest in Supercars growing continuously through large audiences watching our world-class broadcast and a significant growth of our presence online across the globe.

The Repco Supercars Championship round at the Formula 1 Australian Grand Prix returns and Supercars will be on track over three days of the event.

One event in July will be listed as TBC in the draft calendar as discussions continue with circuit providers on the event to be held on that date. Supercars is working closely with Tony Quinn at Queensland Raceway on preparations to return to racing at the Ipswich circuit in the future.

Supercars will continue work on 2022 event formats and support categories for each event with full details to be released over coming weeks. 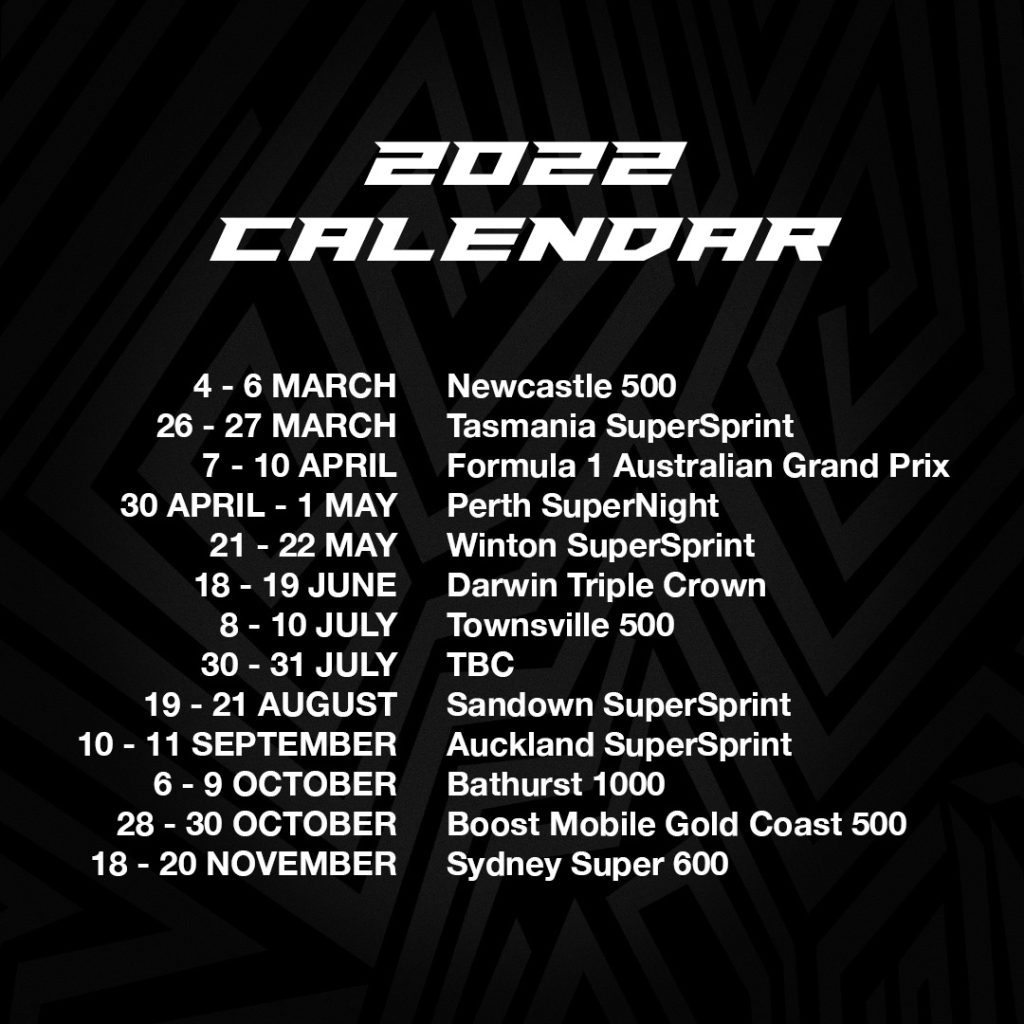