The jewel in the crown, the 60th anniversary of the Bathurst 1000 will be held on Sunday 8 October.

In a win for fans, endurance racing will come back to Melbourne with the most historic venue on the calendar, Sandown, returning to a 500km event.

Co-drivers and Championship drivers will compete together once again at the famous Victorian circuit for the Sandown 500 between 15-17 September in the final event before the Bathurst 1000.

The Boost Mobile Gold Coast 500 will remain as a single driver event and will include three action packed days on and off track from 27-29 October.

For round three, a new multi-year deal has been struck between Supercars and the Western Australia Government for the future of the Perth SuperSprint, which in 2023 will run 28-30 April.

Round four will see the Supercars race at Symmons Plains in Tasmania from 19-21 May, before the annual trip to Darwin for Supercars’ Indigenous Round from 16-18 June.

The Townsville 500 retains its place in the winter school holidays from 7-9 July with another impressive crowd expected for the return to North Queensland.

Sydney Motorsport Park will host the first ever Gen3 night race from 28-30 July.

That will be followed by The Bend SuperSprint at The Bend Motorsport Park in South Australia from 18-20 August.

The Sandown 500 returns to its September date and will be followed by the Great Race, the Bathurst 1000.

Following on from its huge audience in 2022, the 2023 event is expected to bring another mammoth crowd next year with planning already underway for the 60th Bathurst 1000 anniversary celebrations.

After the Great Race, the Surfers Paradise street circuit, which in 2022 drew a record crowd of more than 200 thousand fans, will come to life in late October as the penultimate round of the Championship.

The Adelaide 500 will be the season finale, running 23-26 November where the 2023 Supercars’ Champion will be crowned.

Regarding an event in New Zealand not being on the 2023 calendar, Supercars CEO Shane Howard said:

“We are still in progressive talks with our counterparts there for an event in the future, however as they continue it is in the best interest of all parties involved to focus on 2024 and beyond.

“We have every intention to return to New Zealand and we are confident of an announcement in the new year regarding a partnership with a new venue.”

Foxtel and Kayo will broadcast every practice, qualifying, shootout and race of the 2023 Repco Supercars Championship live and ad free.

The Seven Network will broadcast six marquee events live: Newcastle, Darwin, Townsville, Bathurst, Gold Coast and Adelaide. Seven and 7plus will broadcast highlights of all other events.

Winton and Queensland Raceway will be used as testing circuits for teams in 2023. Both venues will host the inaugural test outings of team owned Gen3 vehicles in January and fans are welcome to attend.

The combined Dunlop Super2 and Dunlop Super3 Series which feature ZB Commodores racing against Car of the Future Ford Mustangs will race on the support card at Newcastle, Perth, Townsville, Sandown, Mount Panorama and Adelaide.

Tickets for the opening event of 2023, the Newcastle 500, are now on sale through Supercars.com and Ticketek. 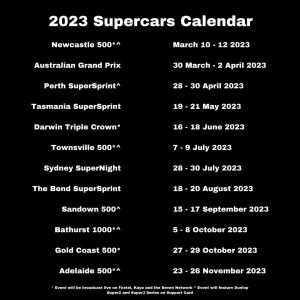